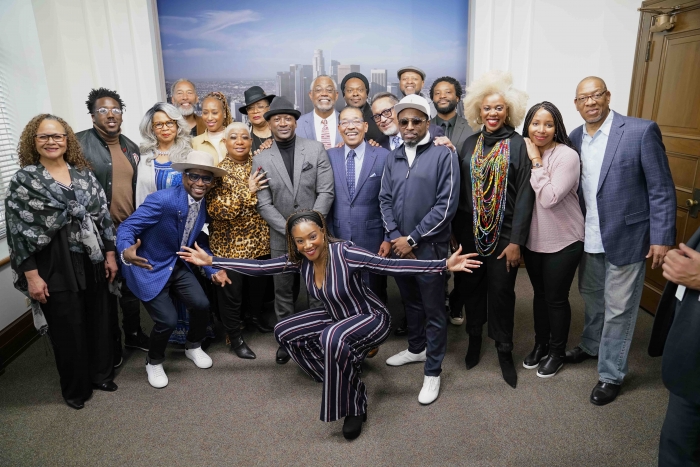 African American comedians have been pushing the culture forward for many years. Last week, at Los Angeles City Hall, a select group of Black comedians was celebrated and received awards for their success and contributions in the entertainment industry. The city leaders who celebrated the comedians were Los Angeles City Council President Emeritus Herb J. Wesson and Councilman Marqueece Harris-Dawson. The celebration concluded with a tour of the Bridge Exhibit in the building.

The exhibit shows a glimpse of the comedian’s impact on American culture. The City’s annual African American History Month event showcases the legacies and history of Black stand-up comedians. Some of the legendsrecognized have opened the doors for many people coming up today. They broke down the barriers and capitalized on opportunities that came as a rarity for Black people in the entertainment industry. Now there are more Black success stories than there has ever been. Aspiring comedians can use their journey as a blueprint to make it in the entertainment business. The honorees took their chance to be great and impacted the culture beyond what they ever imagined.

These comedians channeled their inner Black power to thrive and accomplish goals they never dreamed of coming to fruition. Not only that, but they had significant support from the Black audience, and fan appreciation played a vital role in their journey as well. Michael Williams echoed, “The whole Black comedy industry is the reason why we’re here today. It was the power of the Black audience, it was the power of the voice of laughter from the Black people. Those that started with us, please stand.”

What these artists accomplished in their careers is evidence that African Americans are some of the most talented people on the planet. Comedian Luenell Campbell, who also received an award, said, “I got to speak for all of us; we never saw this coming. We didn’t think anything like this would happen for Black people in Los Angeles. Often times, we work our butt off but we feel invisible. Sometimes, the executives don’t pay attention to us, but today, it is dispelling that.”

Superstar Tiffany Haddish was one of the influential comedians recognized for her accomplishments over the years. It wasn’t easy for Haddish to get where she is today. The odds were against her and she blossomed into a phenomenal comedian, inspiring people all over the world. When Los Angeles City Council President Wesson introduced Haddish, he stated, “This young lady should be an inspiration to every one of us. She’s a perfect example of it’s not how many times in life you get knocked down. It’s how many times you get back up.” Wesson continued passionately, “She should inspire us to do everything that we can to help young children in the foster care system. She should inspire us to get people off the streets into a nice clean home. She should inspire us to dream.” Wesson played a video of Haddish from five years ago, speaking on her journey from being in a foster care program to being on the big screen. To see where she is today, five years later, is truly inspiring. Not only Haddish is starring in big films; she is purchasing property all over Los Angeles. Haddish is creating generational wealth in her family.

Haddish used her moment of recognition to bring light to the needs of more foster homes. She stood in front of the entire city council and said, “I would love to get a business with the City of Los Angeles and put some more foster homes for the youth. We’re going to save some of these kids because I feel like kids are the future. Comedy has helped me navigate through the ups and downs on my journey.” Haddish says she is grateful for the opportunity; she has to be an influencer and wants to provide more opportunities for people.

Eddie Griffin is another legendary comedian that used this celebration to bring awareness to issues more prominent than himself. Before Griffin’s career hit the next level, he was homeless, a story he always shares to inspire dream chasersthat dreamscan happen when you work hard. Griffin said, “Distinguished people here who run ourgovernment, y’all need to fix these roads. We don’t need any more stadiums, and we got enough damn stadiums. We need food for the homeless. Nowadays, they are tasing the homeless. Don’t tase the homeless because they might be a diamond in the rough. That homeless person might be the next Eddie Griffin.”

The notable entertainment publicist Wylisa Bennett received a huge standing ovation when she received her award. Bennett’s family came to support her from North Carolina and San Diego. Bennett stated, “My family thought this was a big deal, so they flew from North Carolina and San Diego. I do this for the culture.” Bennett has been in the business for over 20 years and has helped many celebrities catapult their careers to the next level.

The African American comedians who received awards at Los Angeles City Hall have embarked on remarkable careers. What an honor for them to be paid homage for their achievements, and they are far from finished. This celebration exemplifies how far we’ve come as a culture, and how much further we will continue to grow. Many up and coming comedians aspire to fill their shoes and will see that dream come to fruition. All the African American comedians who were recognized have paved the way and are now opening doors soothers can move forward.